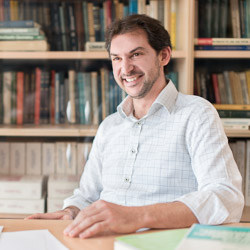 Enrico Grisan graduated in Electrical Engineering at the University of Padova in 2001, spending a semester at the Technical University of Denmark (DTU) with a Socrates fellowship, and being visiting scholar at the Resource Facility for Population Kinetics (RFPK) of the University of Washington (Seattle, USA) in 2000,

He was then intern at Siemens Corporate Research (Princeton, NJ, USA), and then post-doc fellow at the Department of Information Engineering of the University of Padova, where he is assistant professor since 2008.

His main research activity involve the automatic processing and analysis of medical images, either for extracting quantitative biomarkers of disease or for the development of computer aided diagnostic systems. In particular, he has worked in the development of methods for the processing and analysis of retinal and corneal images, the automatic karyotyping of chromosome images, the virtual histology from confocal endomicroscopy images, the detection and quantification of cortical lesion from multispectral brain MRI data, the quantitative analysis of perfusion patterns from contrast enhanced ultrasound of small joints, quantitative assessment of cardiovascular alterations from prenatal ultrasound dynamic images.

He has been co-investigator in several intra-mural projects from the University of Padova, and in different European Projects of the Seventh Framework Programme (AP@home, MOSAIC). In 2014 I was awarded as co-PI a Samsung-GRO project.

From 2007 to 2010 he taught Basics of Computer Science for the undergraduate programs in Astronomy, Chemistry and Industrial Chemistry, Biotechnology and Geology. From 2008 to 2010 he taught Processing and Analysis of Biomedical Data Signals and Images, and in 2010, 2012 and 2013 Signals and Systems, for the undergraduate degree in Biomedical Engineering.

Sorry, no publications matched your criteria.

Sorry, no publications matched your criteria.